February 28, 2017 - For the first time, the World Health Organization (WHO) published a list of “priority pathogens” which constitute a current and extreme threat to human health. WHO is seeking to promote new efforts in the discovery and development of new antibiotics to address a growing threat of antibiotic resistance. 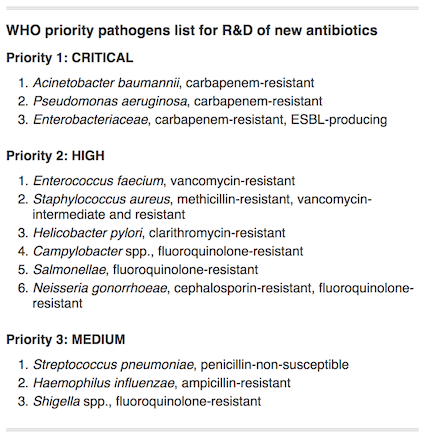 Research encompassing the fundamental mechanism of antibiotic resistance and bacterial biofilms as well as the discovery of new antibiotics and the development of new tools to aid in their discovery have a rich history at the University of Notre Dame and researchers within the Warren Family Center for Drug Discovery & Development.

Shahriar Mobashery’s team recently published research on the regulation of the peptidoglycan protective layer of Gram-negative bacteria such as Pseudomonas aeruginosa. In collaboration with Mayland Chang, Mobashery also discovered two new classes of antibacterials, the oxadiazoles and quinazolinones. The oxadiazoles are active against Gram-positive bacteria, are bactericidal, have efficacy in mouse models of infection, have excellent pharmacokinetic properties, including oral bioavailability, and display a long post-antibiotic effect. The quinazolinones show efficacy in mouse models of methicillin-resistant Staphylococcus aureus (MRSA) infection, and have an unprecedented mechanism of action, binding to the allosteric site of penicillin-binding protein 2a and triggering conformational changes that lead to opening of the active site, allowing access to the site by β-lactam antibiotics, which normally cannot gain access because of the closed conformation of the active site.

Shaun Lee has been studying the biosynthetic mechanisms regulating the production ribosomally produced bacterial peptides, known as bacteriocins, and their diverse roles within their producing bacteria. Enzymes that participate in key steps in their biosynthesis offer new targets for drugs which could be effective against a variety of pathogens.

Joshua Shrout is developing tools for evaluating bacterial behavior and antimicrobial action by characterizing activity in a vast number of well-defined growth environments. Through the use of molecular imaging capabilities of confocal Raman microscopy and surface enhanced Raman spectroscopy, the Shrout lab can study the distribution of signaling molecules, secondary metabolites and virulence factors in biofilm communities of Pseudomonas aeruginosa.

Over the last several years, Sergei Vakulenko and his group have made the major contributions to the microbiological, kinetic and structural characterization of class D beta-lactamases of Acinetobacter baumannii and the elucidation of the mechanism of their carbapenemase activity. These enzymes rendered A. baumannii resistant to the last resort carbapenem antibiotics which resulted in high mortality rates and propelled this deadly pathogen to the number one position on the WHO priority list.